Because I want to be like the cool kids.

Also, I have given blanket permission to anyone to create podfic or art for any of these stories.

UPDATE: This list is outdated by about a year. Anyone looking for recent works can go to my dash on AO3 at http://archiveofourown.org/users/verucasalt123 to find all of my works, both old and new, in these fandoms plus everything I've written in the Teen Wolf fandom, which I have not posted at my journal here.

Title: (Just A Little Faster) Show Me What You're After
Gifter: verucasalt123
Pairing/Characters: Dean/Sam, Charlie, Rowena, Eldon Styne
Word count/Medium: ~1200
Rating: Teen
Warnings: language, brief Wincest, show-level violence
Summary: It’s kind of ridiculous, but they both drive like morons without thinking twice about it. Sam thinks it’s because neither of them believes they could lose their life as a result of something so mundane as an auto accident.

"That guy who thought about having a family, I’m not him anymore.” 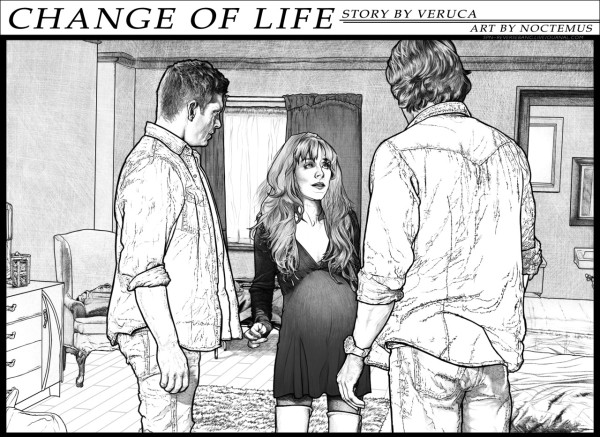 Title: What I See
Rating: General
Pairing: Sam/Cas
Warnings: None
Summary: It turns out that hellhounds aren't the only thing you can see with those holy fire glasses.

Title: Right Here
Author: verucasalt123
Pairing: Sam/Dean
Wordcount: ~1350
Summary: Neither of them ever says I don’t want you to leave or I’m scared out of my mind or this is killing me or I’m sorry.
A/N: for salt_burn_porn prompt "Fuck you, I won't do what you tell me"

Author's Notes: This is for your prompt Dean takes the time to teach Jack something small and simple and human. The story kind of went all over the place but I do hope you like it.

Summary: Dean decides he’ll wait for another day to tell Jack about the sandwich he wished for in the Chinese restaurant all those years ago. Or the time a turducken special from Biggerson’s tried to kill him.

Title: Welcome to Lawrence
Pairings/Characters: Dean, Sam, Missouri
Warnings/Rating: PG for language
Notes/Summary: For madebyme_x's prompt on the OhSam birthday fic meme: Sam gets strangled by a poltergeist with a cable in Home (1.09) - but if Dean arrives a moment later, and Sam passing out and stops breathing? I guess I did a little more than stop his breathing but hey, Sam's pain is our love, right?

Title: If My Answers Scare You
Pairings/Characters: Sam Winchester
Warnings/Rating: PG-13
Notes/Summary: for Lennelle's prompt: Sam between season seven and season eight. What was he up to before he ran over the dog?

Title: In The Place Where You Are
Pairing: Sam/Dean
Rating: Teen and up
W/C: ~1300
Any warnings: Show-level violence, cursing

Title: Winter Stars
Pairings/Characters: Sam/Dean
Warnings/Rating: NC-17
Notes/Summary: Sam's looking up at the stars. Dean just wants to bring him in from the cold.